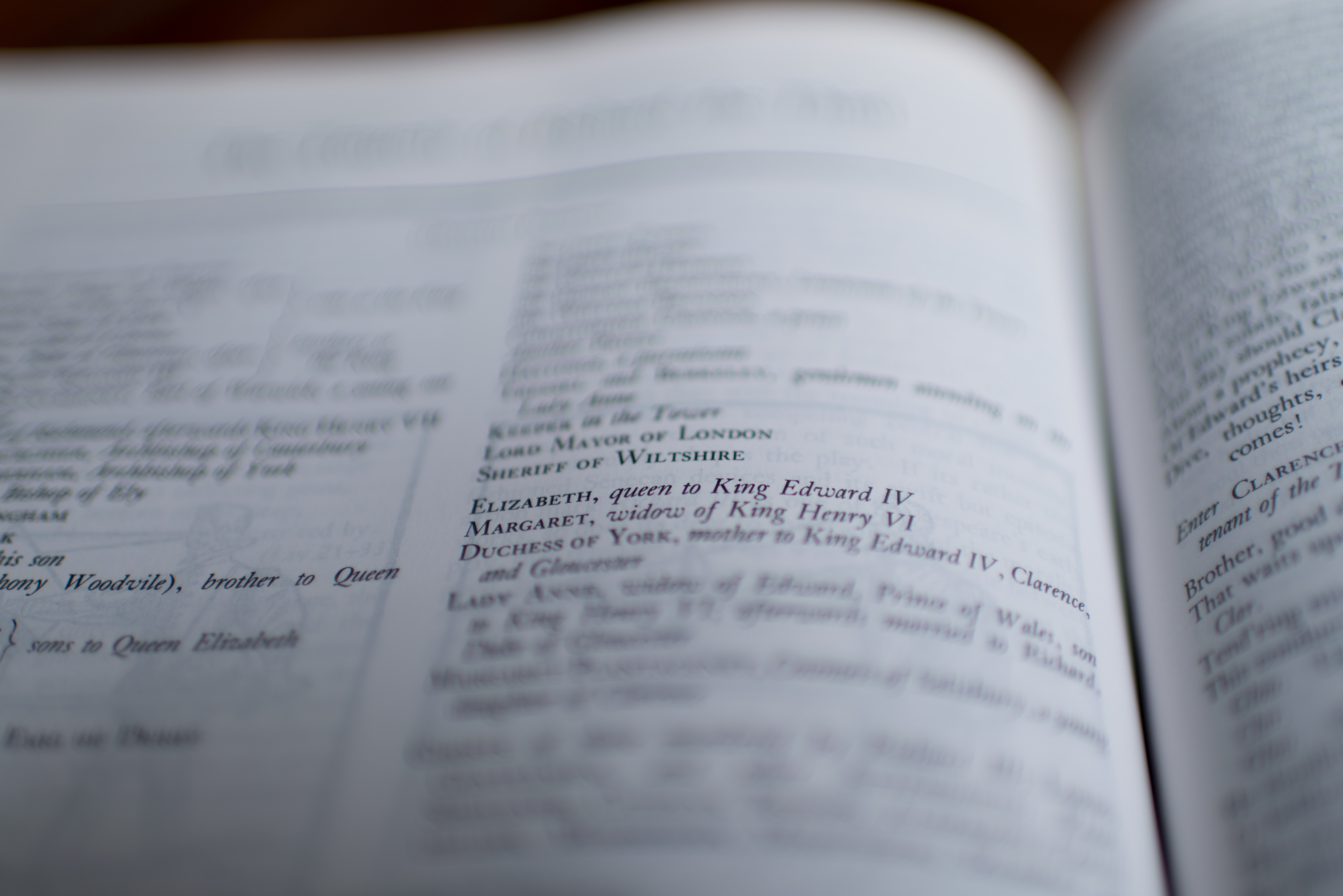 You can learn a lot about generational differences by looking at how each cohort names its babies.

In 1998, the world was enamored with two rising stars named Jennifer: one had the surname of Lopez and the other Aniston. Given the celebrity imprimatur, it’s somewhat odd that 1998 would also officially mark the end of the name Jennifer on the top 20 list of baby names in the US.

To be fair, Jennifer had a great 33-year run in American nurseries. The name was a true blockbuster. From 1970-1984, Jennifer was the number one most popular name for girls in each consecutive year … by a wide margin. For example, in 1974, 63,116 baby girls (about 4% of all girls born that year) shared the name. The next most popular: Amy, with about half as many babies to its credit. Fast forward 40 years to 2015 and only 1,275 girls started life as a Jennifer, a decline so staggering one might wonder if the name should be placed on the endangered identities list. 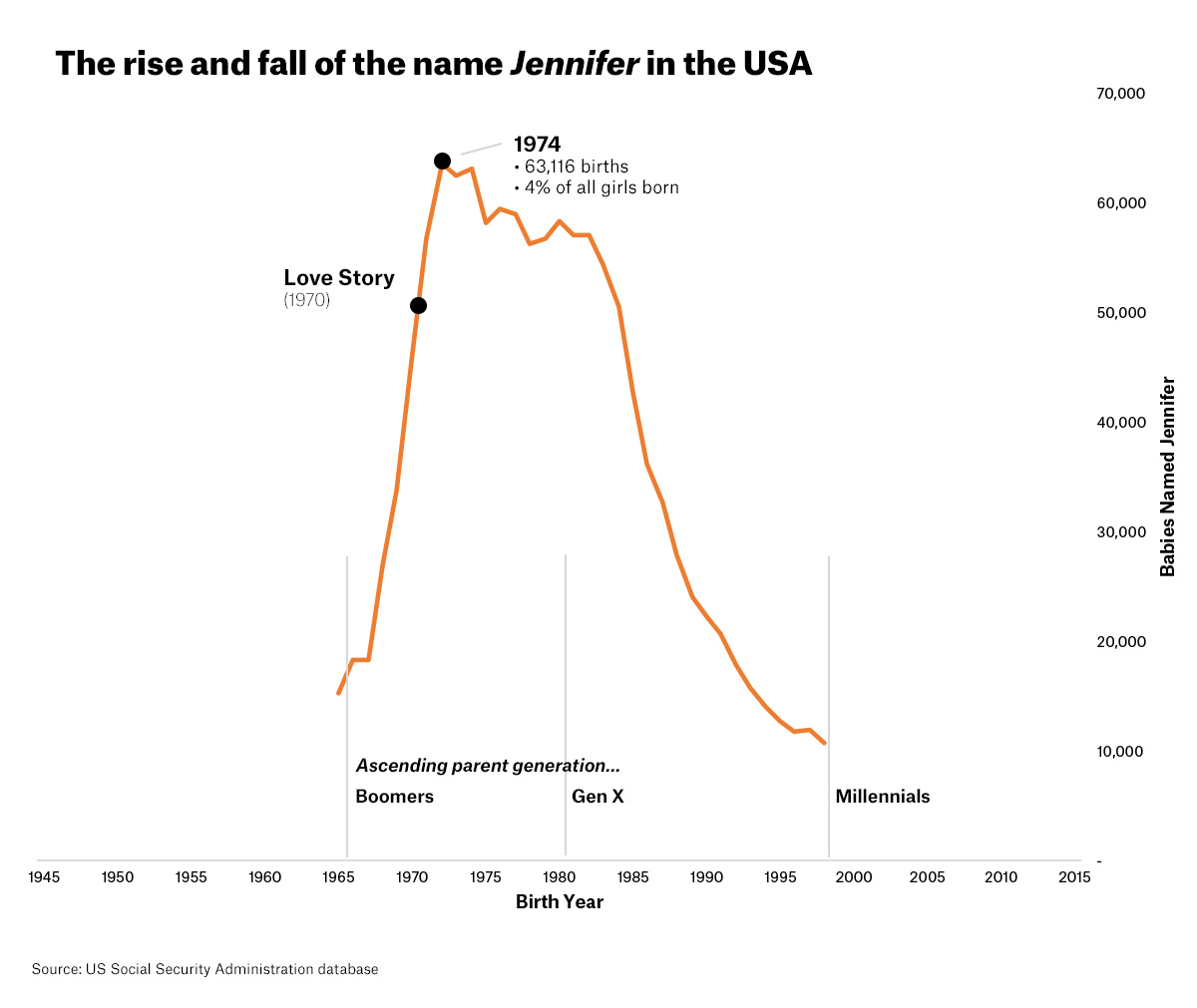 What do the ebbs and flows of baby names tell us about the cultures that breed them?

In the case of Jennifer, an awful lot. The name was obscure at best prior to 1965 when it first ranked on the US Social Security Administration’s annual top 20 list of baby names. But it quickly became a blockbuster name for a new generation of parents we know today as Baby Boomers. Its popularity skyrocketed in 1970, when the film Love Story led the box office. That massively popular tear-jerker starred Ali MacGraw as Jennifer Cavalleri, the beautifully doomed love-interest to Ryan O’Neal’s Oliver Barrett IV.

That was just the start. The name became so prevalent for girls that I could list a dozen Jennifers who sat in classes with me through the 1970’s and 1980’s. Most were known with the first letters of their last name to keep them all straight: Jenny C, Jennifer M, and Jennifer P, just to name a few.

But by the time boomers stopped making babies, the supply of new Jennifers abated. In her place came the Ashleys and Emilys of Generation X. And as the Millennials begin their families, we are seeing the rise of a whole new set of names: Emma, Olivia, Sophia, Ava and Isabella, to name the top five of 2015. 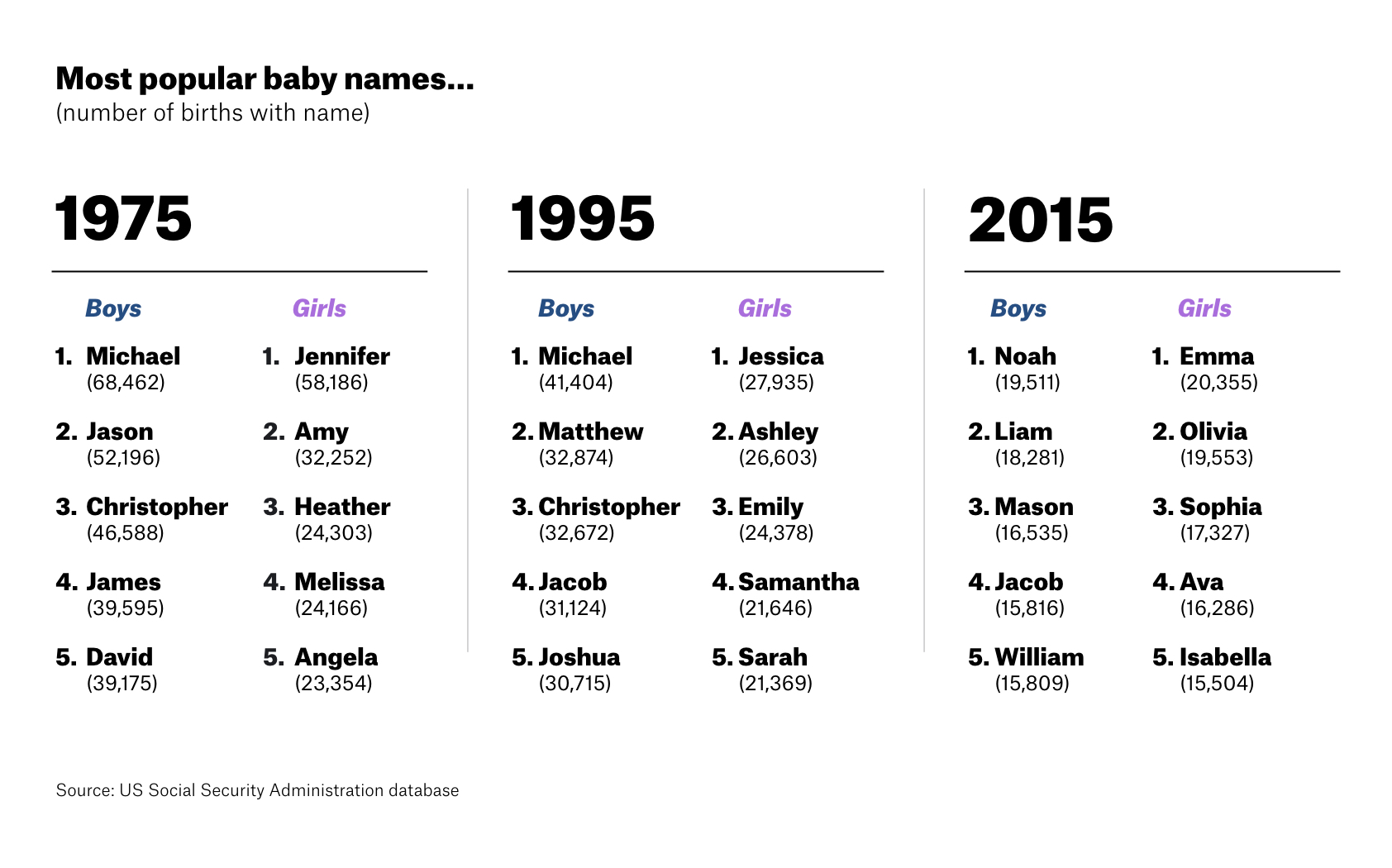 While one could argue that the US has witnessed a shift from approachable, no-nonsense names like Jennifer, Michelle and Amy to more Victorian, uber-feminine names like Emily, Isabella and Abigail, what’s more interesting is the growing diversity of baby names.

The story is equally revealing when we consider boys names. Consider the name Michael. Like Jennifer, it has enjoyed blockbuster status, but it has commanded more staying power over the years. The name has been on the top 20 list for boys from 1945 to the present day. No other name for boys or girls can make the same claim. 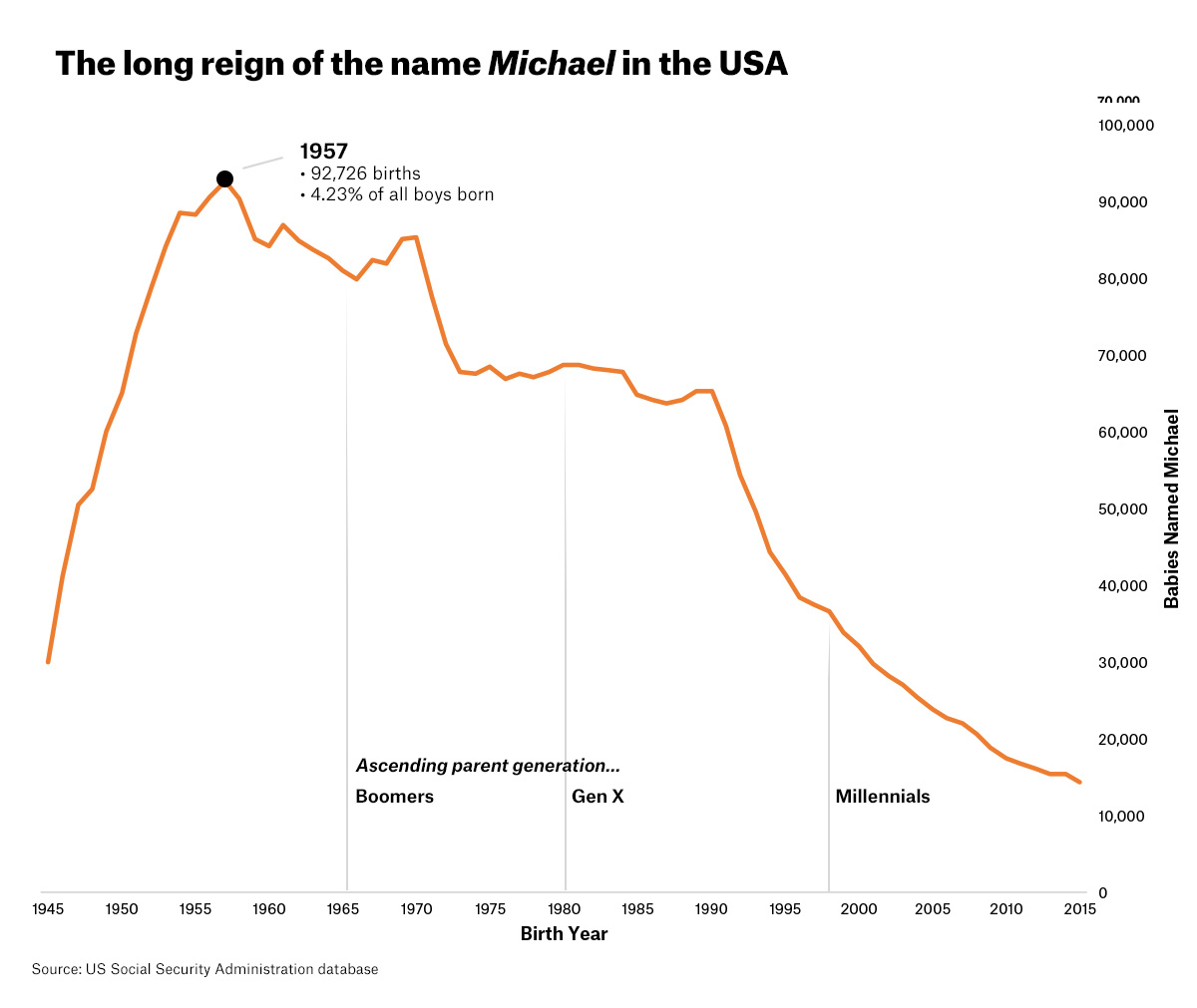 The numbers surrounding the popularity of the name Michael are staggering. In 1957, Michael’s best year, the name was chosen for a record 92,726 baby boys, about 4.2% of all boys born that year. That’s doubly significant when we look even further back. In 1925, the name Michael was somewhat obscure, with only 3,726 new name-bearers. To put that in perspective, the most popular name of 1925 was Robert, with 60,896 boys wearing it on their bassinet. Before the Baby Boom, Michael was less popular than Eugene, Clarence, and Fred; names that don’t even rank in the top 100 today.

It’s Michael’s staying power that truly astonishes. By the numbers, Michael was the #1 boys name from the 1960s through the 1990s. However, the Millennial generation is bringing an end to the name’s reign. Last year, only 14,321 baby boys were named Michael. The name still ranks in the top 10, but it has been losing ground year over year since Millennials began breeding. Noah, Liam, Mason and Jacob are elbowing Michael aside.

It’s not surprising that Millennial parents are favoring names from the distant past. This is a generation that craves authenticity and a nod to history. Less than 10 years ago we witnessed this generation embrace artisanal pickles, aged bourbon, handlebar mustaches, and vinyl records. Today, they are blessing their children with girls names that harken to Jane Austen and boy’s names straight out of the Old Testament. 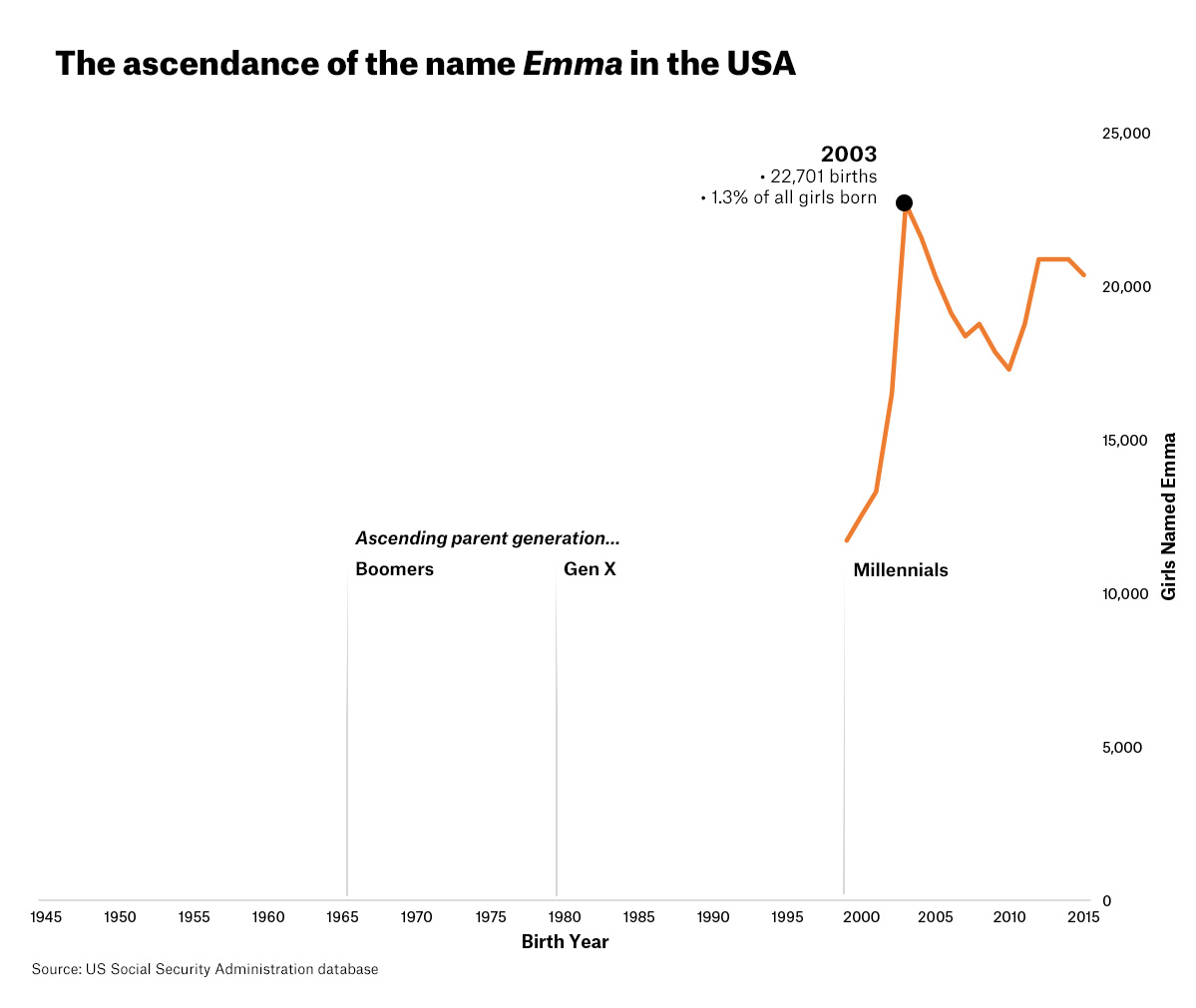 So, too, do the names favored by each generation of parents reflect the age of their enlightenment. For example, Boomers fancied the name Jason. It was the #5 most popular boys name of the 1970s, but it barely makes the top 100 today. The name Jason has Greek roots and literally means “healer.” Not such a stretch for the generation that held peace rallies and espoused the virtues of free love. Many Boomer names revolve around the metaphysical. Jennifer derives from Guinevere and roughly translates as “white enchantress.” Amy derives from the latin root amatus: to be loved. 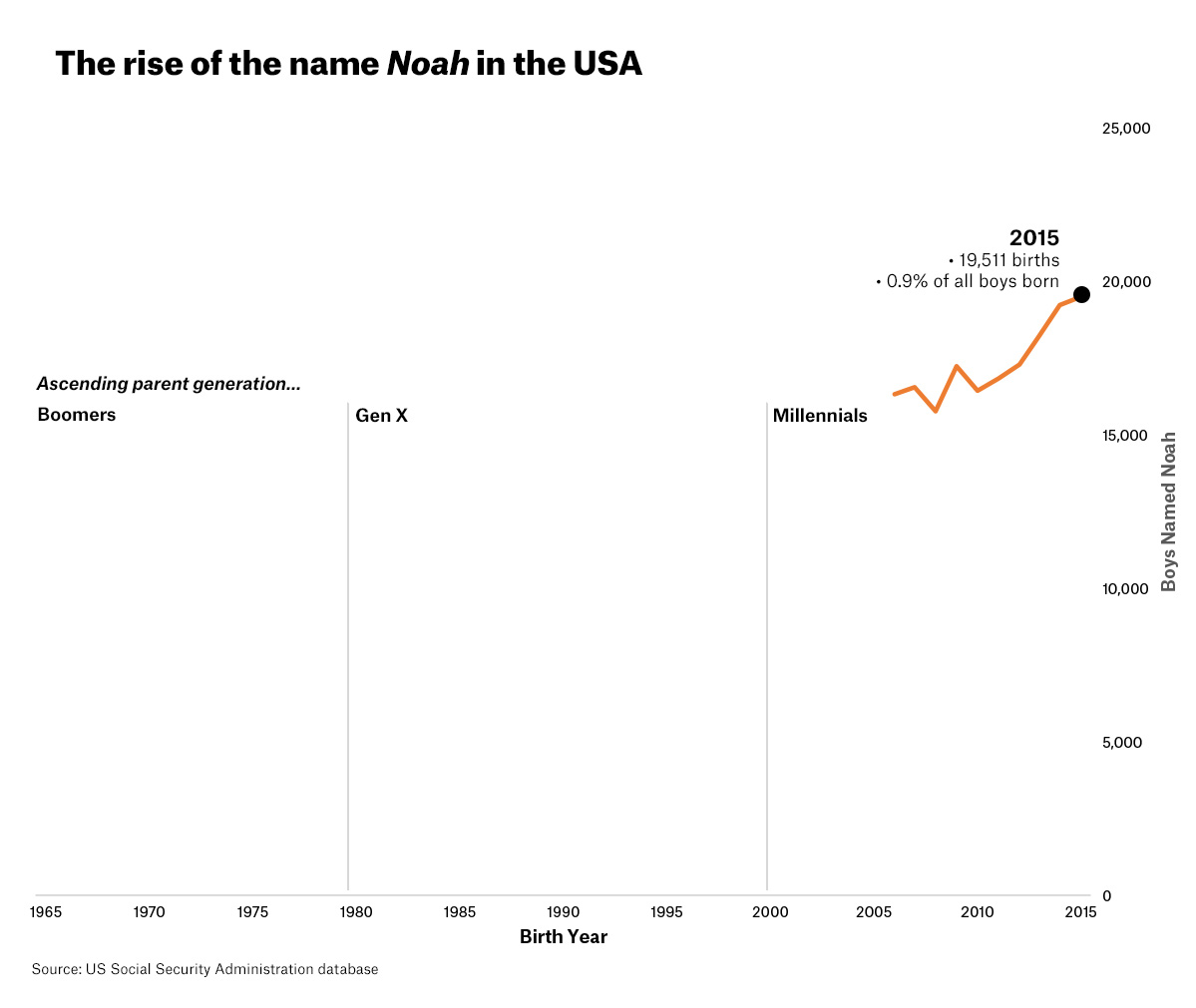 Generation X brought their 80’s experience and wry skepticism to their children’s names. The names could easily have appeared in Dallas, Melrose Place or 90210: Ashley, Brittany, Samantha for the girls. Brandon, Tyler and Joshua for the boys.

And now, as they name their own children, Millennials are reflecting many of the hallmarks that have thus far defined their generation. The new crop of popular names harken to the individual. Mia (#6 name for girls in 2015) literally means mine. Many of the names are linked to founders (Noah, Jacob, Benjamin) which should be no surprise for a generation that worships startups and considers the promise of Silicon Valley as its spiritual salvation.

While Jennifer and Michael may continue to wane in American nomenclature, they serve as mile markers in our collective sensibility. Like a hit record or a television network that draws a 30 share, we may not see names with such broad adoption again. Some of the change is due to a change in custom. Four decades ago it was a common practice to name first born boys after their father. Today, that is seldom so. Instead, young parents search for deep meaning—scouring the web for names that have contextual significance and a hint of a story. Names that were once considered “ethnic” or “old” are now considered clever and nuanced. Even the spelling of names is being used to differentiate (i.e Hailey, Haley, and Hayley are now common variants).

As for Jennifer, the name still has star power. The venerable Xers Lopez and Aniston are still gracing the covers of fashionable magazines, but they’ve found new competition from an upstart Millennial named Jennifer Lawrence.