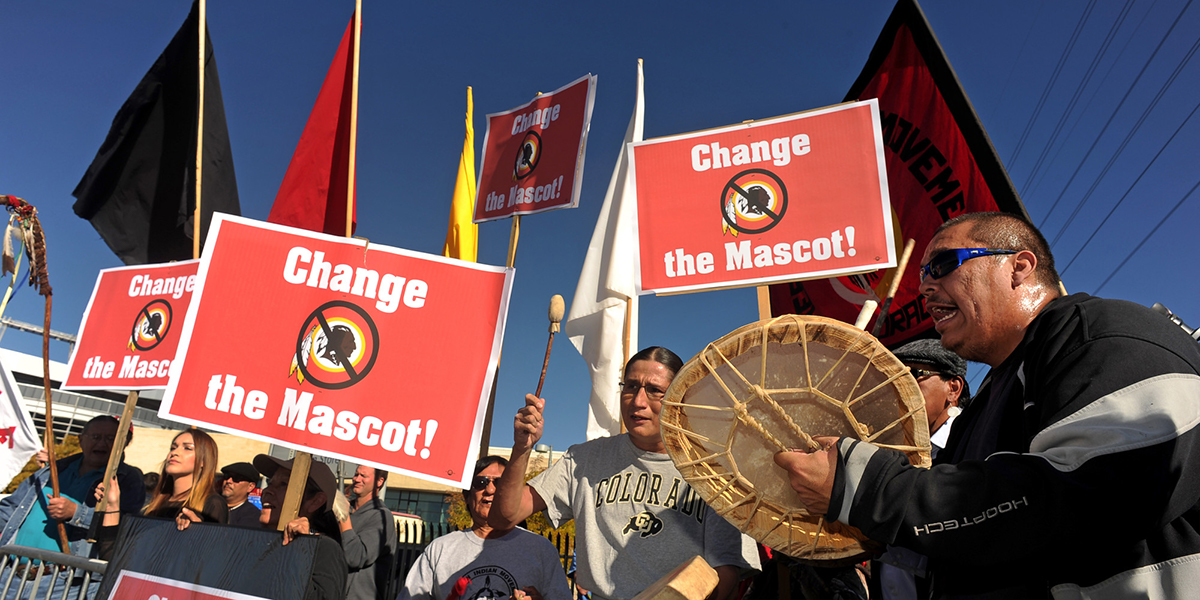 What happens when your brand symbolizes something offensive to others? How much do logos incite bad behavior? The case of the Washington Redskins.

My professional life relies upon two human truths: the power of symbols and the influence of stereotypes. Brands, particularly logos, are symbols that are designed to activate a stereotype. For example, most people imagine the stereotype of an athlete when they are exposed to the Nike swoosh. In fact, that symbiosis is what gives the Nike brand its cachet and market value.

Yet the connection between symbol and stereotype has a dark side. A few weeks ago, the Supreme Court overruled a federal court decision on the case of Matal v. Tam. The lower court’s decision denied trademark protection for disparaging names and symbols. That decision had a ripple effect on major franchises like the Washington Redskins. Had the Court upheld the lower court’s decision, the Redskins would have lost their ability to litigate against companies that wished to copy their logo or use their brand identity without permission.

In a unanimous ruling, The Court rejected the lower court decision on First Amendment grounds. Writing for The Court, Justice Samuel J. Alito stated, “it offends a bedrock First Amendment principle: Speech may not be banned on the ground that it expresses ideas that offend.”

While The Court has settled the matter on legal and constitutional grounds, the case of disparaging symbols and their influence on negative stereotypes remains, as does a pertinent question: should the Redskins rebrand? In certain circles, that question invites a fight.

There have been numerous studies that have corroborated the belief that Native American mascots activate negative stereotypes of Native culture. These studies have failed, however, to demonstrate or quantify the consequences of such activation. But a recent study in The Journal of Social Psychology revealed some disturbing new findings. Specifically, the study by Melissa Burkley, Edward Burkley, Angela Andrade and Angela C. Bell found that Native American mascots did more than activate negative stereotypes. These symbols also triggered the application of such stereotypes by people who held stereotypical attitudes.

There’s an old maxim in research: correlation does not equal causation. In other words, just because two numbers move up or down together does not mean that one number affects the other. In similar fashion, activation does not equal application. A symbol may cause negative stereotypes to load (or activate) in a person’s mind, but that doesn’t mean that the person acts upon (or applies) those stereotypical ideas as a result. Thus, seeing a Redskins logo does not necessarily make a person view Native Americans as “savages” or dangerous to society. However, amongst people who hold such a negative attitude toward Native Americans, the Redskins logo may, in fact, encourage them to apply their belief. That is, the logo can be a trigger that reinforces their judgment and influences their behavior.

The study is particularly relevant in a different context: the Confederate flag. Sympathizers have argued that the flag is a symbol of Southern pride, while opponents have argued that it is a beacon of hate. While it is true that many Southerners may feel pride for the flag without holding stereotypical attitudes toward African-Americans, it is also invariably true that the same flag emboldens some confederate apologists to behave in ways that conform to racist attitudes.

This sketchy dividing line of branding’s landscape raises many ethical issues. At what point is a brand responsible for the unintended consequences of its identity system? Pepe the Frog was the stoner icon of a 2008 comic series called Boys Club, by Matt Furie. The symbol became so popular that celebrities such as Katy Perry and Nicki Minaj used it on social media. But in 2015 the alt-right movement appropriated it. Soon after, Pepe has regularly appeared in anti-Semitic propaganda and at rallies of white nationalists. The Anti-Defamation League included Pepe in its database of hate symbols last year, and Furie ceremoniously killed Pepe off earlier this year. But the glassy-eyed frog continues to appear without permission in controversial applications.

Pepe is an extreme example, and it would be hard to argue that the case of Pepe the Frog or the Confederate flag are equivalent to the case of the Washington Redskins. Yet the Redskins case is a growing brand challenge, particularly if the Redskins logo becomes a symbol that validates the beliefs of racist sub-segments. There is also the reality that the logo will increasingly offend segments that have positive attitudes and opinions about Native American culture. And then there is the possible danger of the logo being appropriated—like Pepe or the confederate flag—to stand for something distinctly different from its original meaning: as opposition to authority, justified belligerence, or the purposeful exclusion of selected audiences.

Symbols acquire meaning through their application. Stereotypes gain their meaning through the unpredictable flow of culture. For over a millennia the swastika was a symbol of luck and prosperity. In less than a decade the flow of culture transformed it into a universal symbol of fear and hatred because of its application. We must never lose sight of the fact that something which seems relatively inert may in fact influence rather potent behavior.