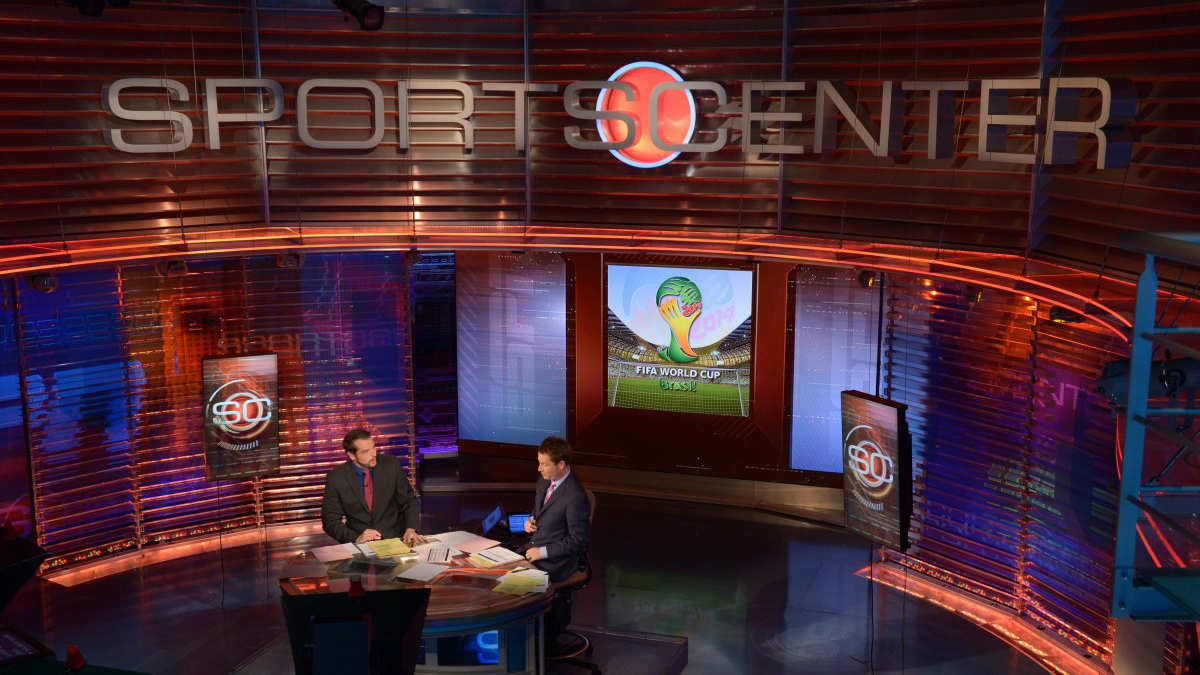 Is ESPN Destined to Become the Next Ticketmaster?

As consumers continue cutting cords, ESPN is facing the biggest business challenge in its history. New research indicates its brand is also at risk.

I travel a lot. It has always been part of my work life. Like many seasoned travelers, I rely on a bevy of ritual behavior, from packing my bags at home to organizing my hotel drawers at my destination. But I recently realized that one of my important travel rituals has all but disappeared. For years, my first action upon arrival was to turn on the television and find ESPN. I haven’t done that in a long time. According to recent data, I’m not alone.

ESPN has gained unwanted media and investor attention lately. Just a few years ago it was the king of cable, commanding the highest per-subscriber rate in the industry. Today, its subscriber rate is down 3%, and its advertising revenue growth has declined to a meager 1%, according to Richard Greenfield at BTIG. Viewership this season, compared to 2015-16, is down 9% overall, and 11% in the valuable 18-49 segment, according to Nielsen. Branchannel.com claims “the ‘worldwide leader’ has seen its audience fall to 92.94 million homes from the 100.18 million it served in May 2011.” And in its 2017 annual ranking, Forbes estimated that the ESPN brand was worth $15.6 billion, down nearly 8% from a high of $16.9 billion a year ago.

The reasons for these declines are sundry, with most analysts agreeing that cord-cutting is the largest factor. As consumers switch to video-on-demand services and the inevitable unbundling of cable begins, fewer people are forced into subscription and the per-subscriber rate at ESPN is in a free-fall. Other factors include a plethora of new competitors, and the rise of new media platforms that render many of ESPN’s programs redundant by providing up-to-the-minute updates on mobile devices. But all of those factors don’t really describe the change in my ritual travel behavior. There was a time when I lived for my daily dose of SportsCenter. Today, I can’t recall the last time I tuned in.

Intrigued by this observation, I decided to add ESPN into an annual consumer survey I do to measure the strength of attachment to 25 iconic brands (Apple, Starbucks, Nike, etc.). I was shocked at the findings. Only 11% of US consumers 18+ indicated any attachment to ESPN. To put that number in perspective, Amazon has been the leader in our rankings ever since we fielded our first survey in 2013. Today, 78% of respondents are attached in some form or fashion to Amazon. Looking at other media brands, 60% are attached to Netflix, 43% are attached to Disney, and 27% are attached to HBO. 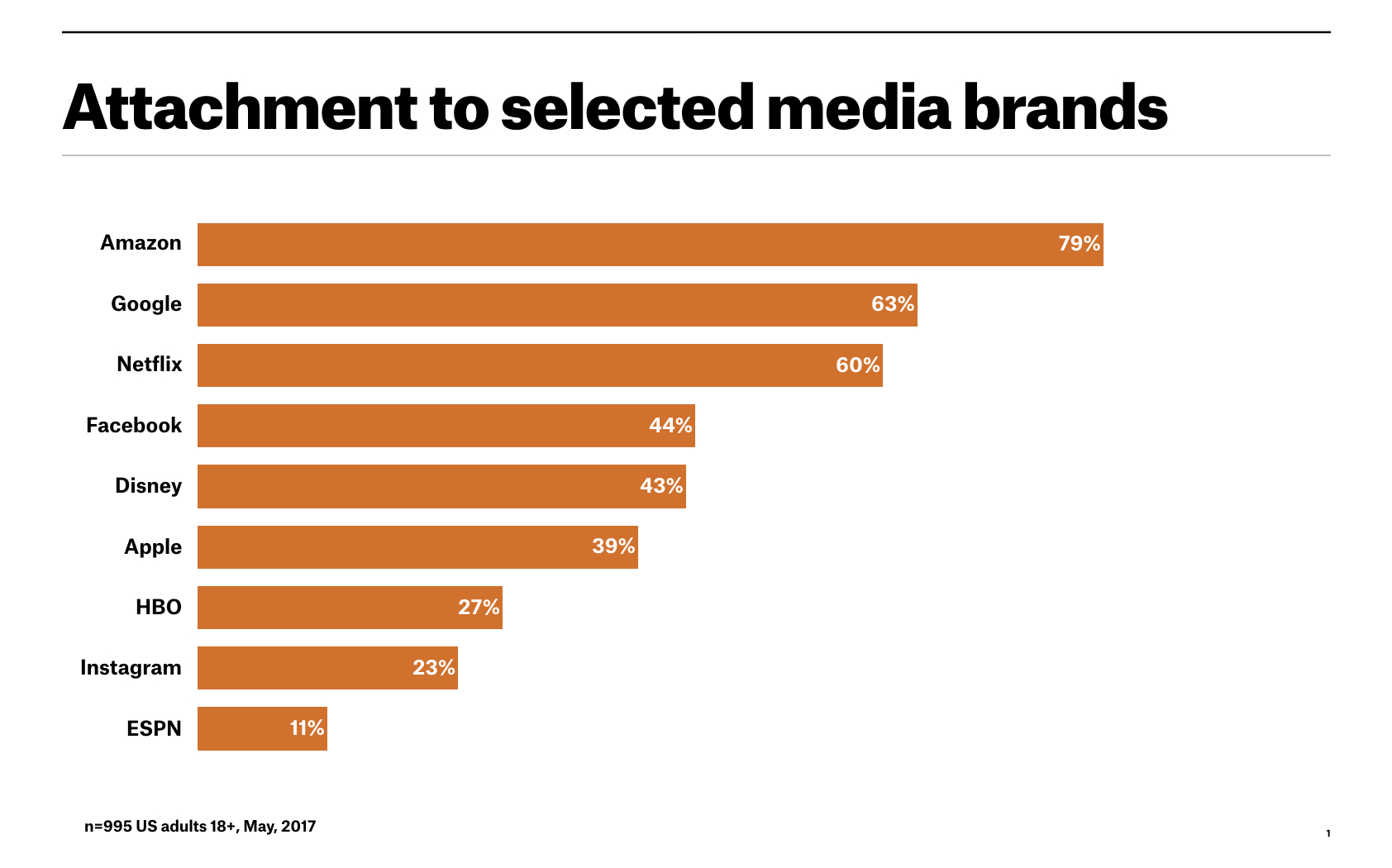 If I were Disney CEO Bob Iger, I would be worried. ESPN has more than a business challenge. It has a growing brand challenge. But Iger doesn’t seem to feel that way. Here’s an excerpt from his most recent earnings call with investors, held on May 17th of this year:

Iger and several of his executives have also asserted that the secret to ESPN’s brand power is its dominance in live sports programming. It is true, ESPN has invested billions to be the exclusive broadcaster of many of the world’s most popular sports franchises, but that pseudo-monopoly power can’t fix a decline in brand attachment. If you doubt this, consider the case of Ticketmaster.

Ticketmaster is one of the most reviled brands in America. Though vitriol for the gatekeeping live event brand has subsided in recent years due to the emergence of several competitive platforms, many consumers still sneer when they hear the brand’s name. They despise what they see as an unfair taxing authority that gets in the way of their relationship with their favorite artists. If ESPN isn’t careful, it will find itself on the same side of this critical relationship.

It’s certainly not the position ESPN took to become one of the world’s most beloved brands, back when I was still tuning in religiously. ESPN won our hearts by being a network for sports fans by sports fans. From its hilarious “This is SportsCenter” campaign, to its nurturing of charismatic personalities such as Dan Patrick, Keith Olbermann, Stuart Scott, Rich Eisen and the legendary Chris Berman. ESPN was a brand that cut through all the clutter and created a rallying point for true fans. They took that one step further when they enabled Bill Simmons to launch Grantland, and release groundbreaking programs like 30 for 30.

A few of the originals remain. Simmons was ousted in 2015, arguably for having too much personality. Scott left us too soon after an inspiring battle with cancer. Olbermann and Patrick left the network years ago. With each departure, the ESPN brand character has become more diluted. I suspect the decline in the brand is a result of a shift in its promise.

In Brand Real I shared the idea of a promise spectrum. To the left of this spectrum are functional promises of access and specific features. To the right are more evocative promises, such as a lifestyle or a cause. In its heyday, ESPN was positioned right of center. It was about the approach (by fans for fans), the personality (uber fans), and the cause (the glory of sport in all forms). Today, that promise skews left. If we take Iger at his word, it promises to be the only place where you can watch the most important games live. That’s an access promise. And while it can certainly generate monetary value (for a time), it doesn’t resonate in the hearts and souls of the faithful in quite the same way. 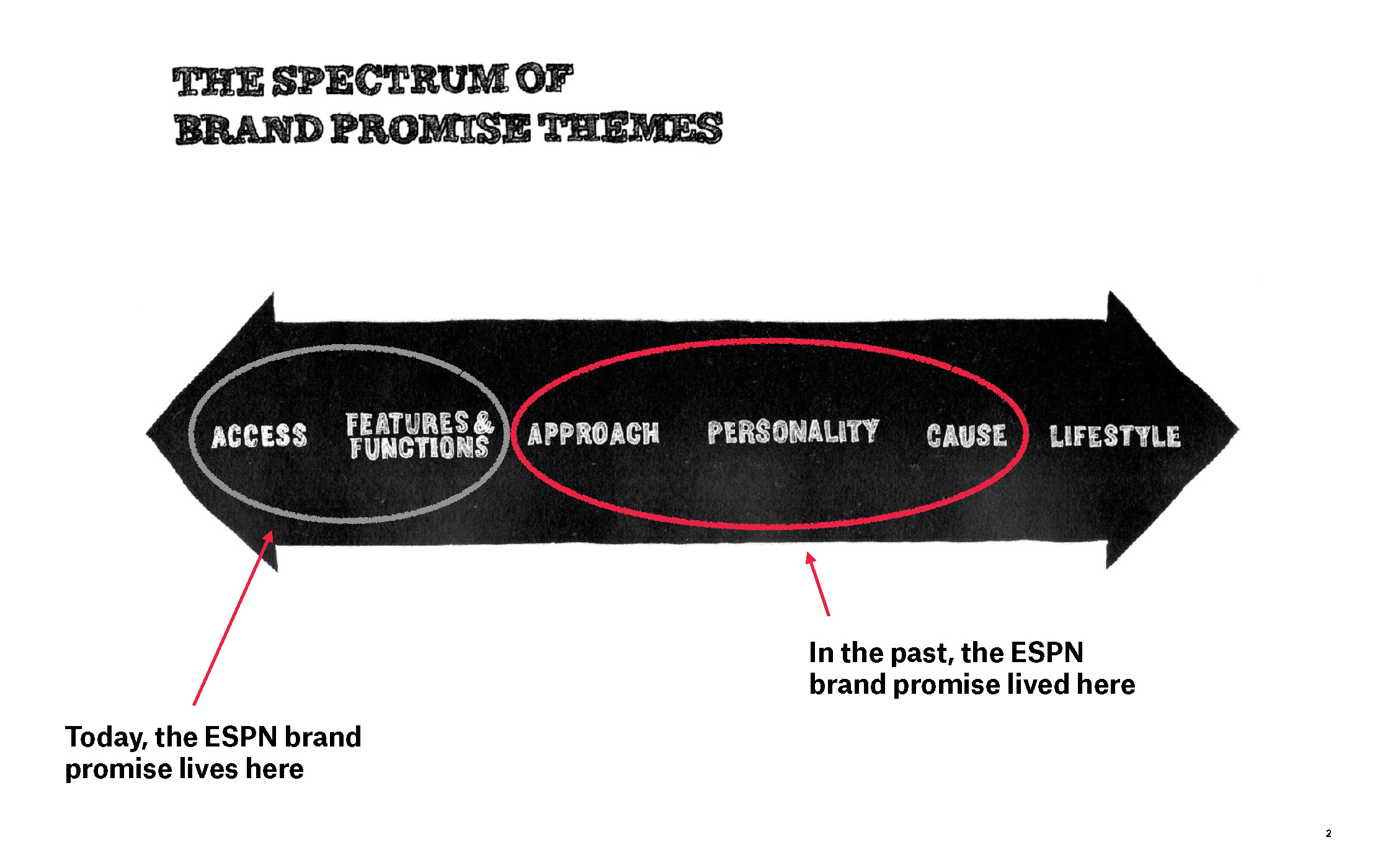 I hope ESPN finds its way back to the brand I once loved so much that it was an essential part of my daily ritual. I hope it refocuses on that certain shared vernacular that unites us as sports fans. I hope it finds new and nutty on-air ambassadors who channel our passion for games and for heroes and for the thick of competition. That was the spirit that it made it an innovator and not a gatekeeper.