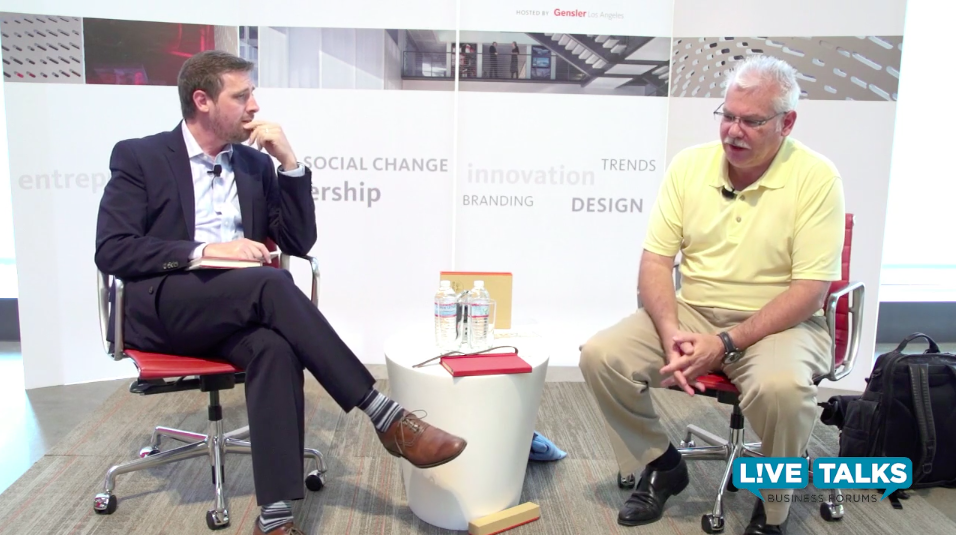 The Maker Movement Manifesto: A conversation with Mark Hatch on a creative revolution

Chris Anderson has called the maker movement the next big thing. Leading the way is TechShop. To learn more about how it is empowering a new generation of inventors and entrepreneurs I interviewed CEO Mark Hatch at Live Talks LA.

Chris Anderson, the former editor in chief of Wired magazine and the author of the best-selling book The Long Tail, said “if you thought the web was big, this is going to be bigger.” He was talking about the maker movement–a creative revolution that is driving invention and leading to innovation all over the world. It is driven by cheap, powerful and easy-to-use tools that allow just about anyone to build what they imagine.

Last month I sat down to interview Mark Hatch for Live Talks LA. Mark is the CEO of TechShop, an open access makerspace filled with “every tool and piece of equipment needed to make just about anything.” He is also the author of The Maker Movement Manifesto: Rules for Innovation in the New World of Crafters, Hackers, and Tinkerers, a thorough and fascinating tour of the maker movement, the makers who have thrived from it, and the principles that inspire all of us to get out there and make something. The book outlines nine principles that have fueled the growth of the movement. These principles are actually excellent guidelines for any creative endeavor, especially those that rely on teamwork, collaboration and prototyping.

Hatch reveals the essence of the maker movement in the first sentence of the book’s first chapter:>In the spirit of making, I strongly suggest you take this manifesto, make changes to it, and make it your own. That is the point of making.

Citing Carl Jung’s assertion that creativity is at the core of mankind, Hatch elaborates on the historic underpinnings of this drive to make changes to things in order to feel more independent, free and creative. He argues that making things is so important to our culture that it has actually ignited real revolutions.

In the late 1700’s we came to the realization that we were losing access to the tools of our own productivity. It was a wrenching time. You were in a guild or in a manufacturing environment where you owned your own tools, you produced them, and you knew who your customers were. Then we rapidly moved into an environment where it was institutions that controlled those tools. And, as a result, there were actually revolutions. It goes beyond the mode of how they made money changing. The mode of their living had changed.

The first principle of the manifesto elevates this desire to use tools to make things of our design into a fundamental human need:

Making is fundamental to what it means to be human. We must make, create, and express ourselves to feel whole. There is something unique about making physical things. Things we make are like little pieces of us and seem to embody portions of our soul.

Evidence of this desire is all around us. While software developers and the makers of digital things garner the lion’s share of media attention, you will find an explosion of inventions, DIY product designs and new companies that all originated from the maker movement revolution. Chris Anderson made the bold statement at the top of this post in reference to his own journey into making. Anderson quit his job to launch a new company  that specializes in robotics and drones–products that can be easily designed and built at a place like TechShop. That is the story that’s not being told because most of us still believe that to invent something today you must have highly specialized skills and a corporate infrastructure with millions of dollars invested in intellectual property and fixed assets.Not true.

If you follow design blogs, there are new posts every day about inventions created by designers who found access to 3D printers, a technology with a price of entry that continues to decline. Last Sunday, 60 Minutes reported the story of Jack Andraka, a high school student who just won Intel’s Gordon Moore Award for his self-driven experiments to discover an early test for pancreatic cancer. In May, the New York Times reported on a group of hobbyists that were genetically engineering a species of plants to glow in the dark as an alternative energy project. And Hatch’s book provides numerous examples of people who made complete career changes when they discovered how the inventions in their head were within reach with the right tools, knowledge, and community of support. The maker movement is driving people to follow their creative urges to make change happen.

I had a visceral reaction while reading The Maker Movement Manifesto. I kept wanting to put the book down and go prototype something. Unfortunately, there isn’t a TechShop in Los Angeles yet (though Mark told me efforts are underway to bring one here). Until we get one, there are many ways to apply the principles of the movement to everyday life. And it’s infectious. As Hatch put it:

This is one revolution that you will want to join. It doesn’t just change you, it has the power to change those around you as well.